Jen Casper shows respect and inclusion to all
Debbie Cutler

Jennifer “Jen” Casper, a PhD degree candidate in sociology, was awarded March 15 the Jordan Hoyt Memorial Tribute to Women Award for her excellence in contributing to an environment of equity, fairness, and justice to women on campus.

The award, given to a staff member, faculty member, and student on campus, honors Jordan Hoyt, an MU staff member who earned a BA and master’s at Mizzou. Hoyt worked in the Office of Admissions and died in a terrible car crash in 2019. She was known for her exceptional commitment to women’s advocacy and social justice.

“I’m really excited about the award,” says Casper (she/her). “It was definitely unexpected. I’m in the middle of writing my dissertation. So it was just the push I need to keep going.”

Dating is Different for Black Students

Casper’s research involves the experiences of Black undergraduate students and how they navigate hookup culture at a historically white university. “I look at the intersections of space, race, gender, sexuality, class, and how Black students navigate those spheres differently from white student populations. Jen has found that Black students develop other ways to navigate dating and hooking up that reflects cultural differences from their white counterparts.

Casper was nominated by Mel Constantine Miseo (they/them) and Joan Hermsen (she/her). Both praised her in nomination letters to the MU Committee on the Status of Women, part of Women’s and Gender Studies.

“I have witnessed Jen’s endless passion for uplifting and providing resources for marginalized women at Mizzou,” says Miseo. “She shares her research with different student audiences at Mizzou, revealing the impact that race has on intimacy. It’s powerful for students to think about and make sense of their lives as Black students at a historically white institution.”

But I didn’t know how to give a voice to it. I feel like sociology gave me that voice, and allowed me to better understand the world and who I am. Jen Casper

Miseo says Casper goes above and beyond her responsibilities as a teacher and researcher by providing the “opportunity to celebrate the vibrancy of black women during talks about feminism, black women kinship, and black women’s history at events hosted by various campus organizations, such as Sigma Gamma Rho, Alpha Nu, Delta Sigma Theta, the Association for Black Graduate and Professional Students, and the African Graduate and Professional Student Association.”

Hermsen, Casper’s academic advisor, notes Casper’s teaching role on campus has gone above and beyond the department’s expectations as a classroom teacher. “(This) cannot be overstated,” she says. “Jen teaches courses on gender, hip hop feminism, and Black intimate relationships. She is an outstanding teacher.”

Casper’s goal is to change the way individuals look at race, gender, sexuality, etc. “I’m trying to change the world,” she says. “I know that’s a very cliché answer, but I’ve always been of the belief that sociology changed how I saw the world. I’ve learned a lot about myself through taking sociology classes, learning about systems and behaviors, and patterns of behavior and oppression, and privilege, and all those other things I had experienced.

“But I didn’t know how to give a voice to it. I feel like sociology gave me that voice, and allowed me to better understand the world and who I am. That’s what motivates me. The knowledge I’ve gained has empowered me so much.  And I want to share that knowledge and passion with my students.”

Casper received her master’s in sociology in fall 2017. She has two doctoral minors: Black Studies and women’s and gender studies. She will graduate with a PhD degree in sociology in May 2022. 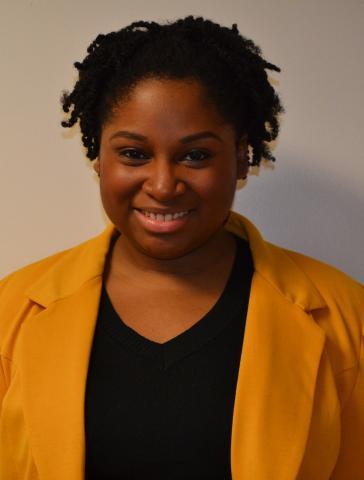